I had to expedite this release because of the issue mentioned in the previous post with iOS 5 and picking an image from an existing album or camera roll.

Because of that issue I had to finish up the features I didn't plan to release for several weeks.

Additional information is now available for Weapon Configurations. You can specify multiple caliber setups! You may have a .357 SIG and a .40 S&W setup for a pistol. Now you can track the usage of both. I think that is pretty dang sweet!


In Maintenance you can quickly specify if you re-tension the extractor on maybe a 1911 with an internal extractor, or specify some of the common parts replaced on regular intervals such as the recoil spring.


Accessories can now be stored in Gun Log! This is a feature that I would have never done for my self but is in response from the many users of Gun Log. What started out as a log book for shooting results now includes a log book for property reference. For those that want to use the feature can store purchase information and other data about accessories such as optics, lights, lasers, or what ever you have.

Sorry about the photo picker issues and I hope you enjoy the new features.
Posted by Geoff Slinker at 8:26 AM No comments:

I was just testing some new features for Gun Log when I came upon a bug on iOS 5 on an iPhone or iPod Touch.

If you are picking an image from an existing camera roll or album the image picker will not dismiss.

I have it fixed and will update the app as soon as possible.

Ammunition now has fields for round count and for bass usage count.

The brass usage count is for reloaders/hand-loaders so that you can track how many times the brass has been used.

A new caliber was added to the list, the .300 Remington Ultra Magnum.

Also, there were significant database changes made in preparation for many features to come!

Please don't forget to rate the app and please contact us with feature requests.

Thank you for using Gun Log. I hope you find it feature rich and useful.
Posted by Geoff Slinker at 8:27 PM No comments:

When I first started writing this app one of my pistols was not running properly. Tracking which ammunition failed wasn't enough. I also needed to know which magazine was used as well as the firing method and stance. Was it me limp wristing? Was it the magazine? Was it the ammo? I replaced the recoil spring, but when? How many rounds on that setup? All of these questions and more have to be considered when diagnosing problems. So I wrote this app to help me track failures. Pretty soon I was tracking all kinds of related data. Well, I then decided to put this on the App Store.

With version 3.2 of Gun Log the application has become a mature and feature rich application. I hope everyone that purchased a previous version has found these updates to be helpful and not disruptive. This brings me to another decision point on pricing. Since the feature set is ample and since I have put a lot more time into this than I ever imagined do I charge more? I don't know yet.

Well, on to the description of version 3.2 of Gun Log.

New Ammunition Report shows rounds fired for each ammo type you have entered and used in a firing session.

More photos! You can now take a picture of your weapon and each weapon configuration. Photos stored in Gun Log are reduced in size and quality leaving the original image in the camera roll or photo album.

Choose photos from Photo Albums! If your iOS device doesn't have a camera just sync photos through iTunes and then you can pick from those!

Double tap gestures added to many of the "pickers" and views to make navigation simpler.

Various changes to views locating items that are more important or often used so that access and use is improved.

Gun Log does not share the data stored in the application. It is not exported via emails or any type of reports. It is not uploaded to any server or tracked in anyway. This is intentional.  Gun information is valuable and private. There are requests to add features to allow the transmission of this data. I recognize it would be useful to have the data available to use on other systems. If there is enough requests I could make a new app, completely separate from Gun Log that would have the same features as Gun Log with additional data sharing features. As for Gun Log, there is no intention to add any type of data sharing to the application.

The previous tutorials go into great detail on how to use the features of Gun Log. Version 3.2 is slightly different but the changes are not a significant departure from the previous user interface layouts, methods, or functions, therefore this blog entry will show some of the changes but will not go into detail how each field or view is used.

The Weapons view has been slightly modified to show the more commonly used functions nearest the top. Also you can now associate a photograph with each weapon. 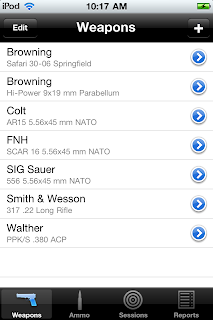 From the main weapon view you can create new weapon entries and navigate to weapon details. 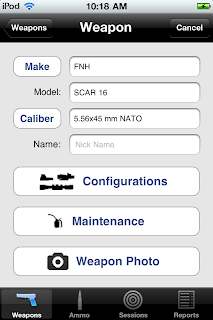 Notice that the buttons to access the weapon configurations, maintenance, and photo have been moved for quick access.

I hope the icons make sense. The configuration icon is showing three different types of optics. I choose this because one of the most common configuration changes is that of optics.

Notice that there is a "nick name" field for your weapon. Some users did not like the idea of specifying their weapon details in case the iOS device was lost or stolen. Instead of specifying the weapon make and model you can just give it a nick name and use that throughout the app. 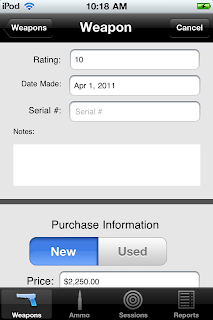 As you drag the view you can see all of the information you can store about your weapon.

Some users do not want to store their serial numbers. Other users want the serial number in case the weapon is lost or stolen and they need to report this information. You store whatever you feel comfortable with. 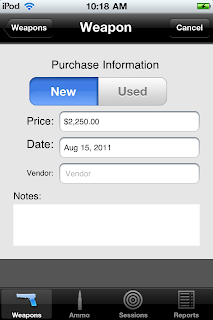 Purchase information can also be stored. You might need this when you trade your weapon or if it is lost or stolen to report the cost of the weapon. 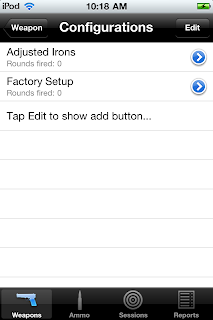 To add a configuration just tap the "Edit" button in the top right. Then tap the "+" button to the left of the "Tap Edit to show add button..." entry in the table. Finally press the "Done" button at the top right. 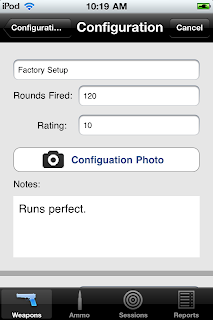 You can take a photo of the weapon or use a photo from the photo album. Just tap the "Configuration Photo" button. 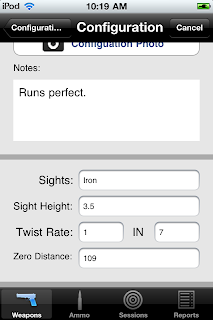 The focus of Gun Log is to track weapon usage. Weapon usage is firing the weapon. Therefore the firing set is the central functionality of Gun Log.

A "Firing Session" is a period of using a weapon. Consider a firing session to be a "day at the range". While you are at the range you may fire several different weapons or ammunition types. Each change in weapon, weapon configuration, or ammunition constitutes a new firing set. 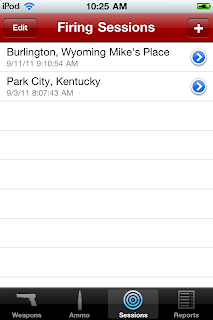 "Sessions" or "Firing Sessions" is the entry point to the recording firing sets. 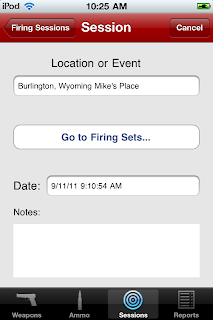 A firing session is typically at a specific location or event. 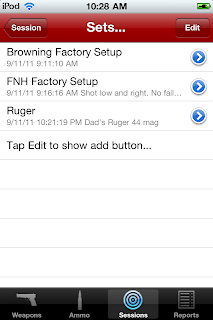 A list or table of firing sets is kept with its firing session. 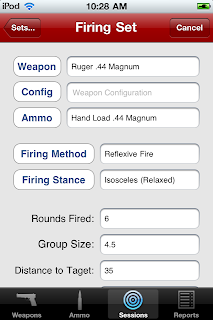 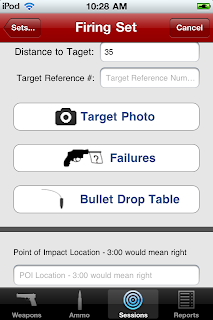 Photos, failure information, and bullet drop information is commonly used and has been moved so that you can access this information quickly. 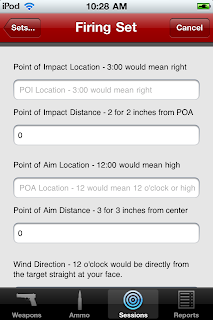 Point of Aim (POA) and Point of Impact (POI) information is critical in understanding how well you are shooting and how well the weapon is operating. 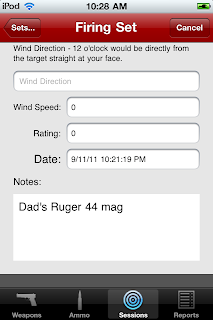 Wind direction is critical to POA and POI data. 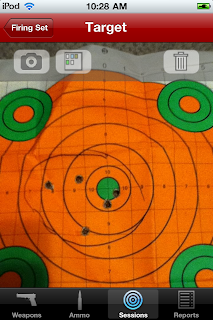 Numbers are one thing, but a picture is worth a thousand numbers or words. You can take a picture of your target and firing results. 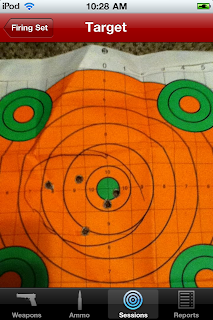 If you touch and hold the controls at the top will fade away so you can see more of the picture.

Each weapon needs and deserves proper maintenance. For some people, their very lives depend on the proper functioning of their weapon. 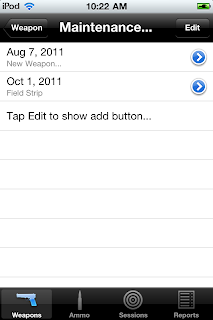 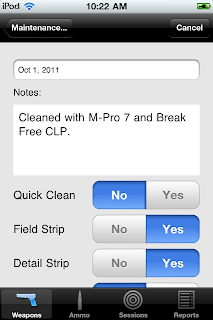 Since there are so many variations of maintenance the main data is just text that you can enter in the notes area. You may have changed a barrel or recoil spring. Maybe you replaced some internal part.

For the common task of cleaning there are selectors so you can quickly specify how you cleaned the weapon. 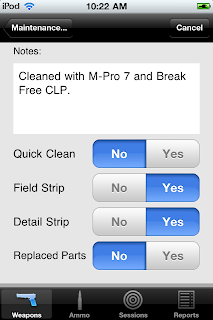 Also, you can signify if any parts were replaced as well. But the details of the replaced parts should be entered in the notes area.

There are many reports in Gun Log. This is the one area I anticipate changing over time. In Gun Log 3.2 there is a new report. In the "Ammunition Reports" section there is "Rounds Fired by Ammunition". 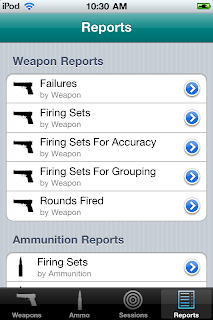 Here is the "Reports" view. Just scroll the view a bit to see the new "Rounds Fired" report. 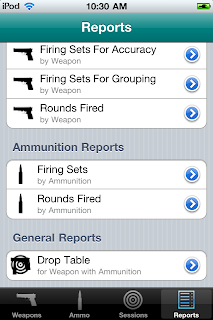 Just tap the "Rounds Fired" entry to go to the report. 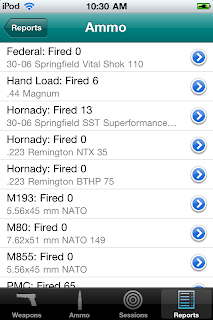 Each ammunition entered in Gun Log is listed and the name of the ammo is followed by "Fired #" where # is the number of rounds fired.


A Note about Images/Photos

Images and photos can take up a lot of space and memory. Gun Log stores a copy of the photo that is reduced in size and quality. The original remains in the camera roll or photo album.

Initially I had a thumbnail view of the weapon in the weapon view, as well as for the configuration, and firing set. I found this to use too much memory to be worth the thumbnail and so I took it out.

The image/photo view allows for zooming, scrolling, and hiding the controls. 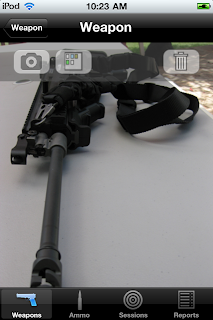 Gun Log 3.2 has become a feature rich tool since its original release. I hope you find it useful for the price! Be safe.

Posted by Geoff Slinker at 8:51 PM No comments:

I have updated the "target view" for a firing session.

Now the controls are on top of the picture and they are transparent. 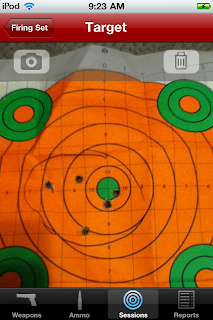 If you tap and hold, the controls will fade from view! 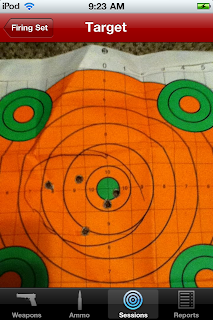 The target shows the results of my first time shooting of my father's .44 Magnum. First shot was to see how to hold and the next five shots are shown on the target! They were hot loads and things started to open up a bit. Target distance: 35 yards.

Remember, I wrote this app for me!
Posted by Geoff Slinker at 8:30 AM No comments: